JANICE GUINAN’S ANCESTORS lived in Nova Scotia when the Shubenacadie Canal was built.

In fact, they lived close to Selma, where the Shubenacadie River empties into the Cobequid Bay, and where The Shubenacadie Connection officially opens Saturday.

Guinan is one of 22 visual artists exhibiting in an art show spearheaded by the canal commission and split up over five venues stretching from one end of the historic waterway to the other, from Gallery 215 in Selma to the Fairbanks Interpretive Centre in Dartmouth.

“I think it’s wonderful to raise awareness for the preservation and restoration and development of the canal,” says Guinan, who lives in Bible Hill.

Her painting, The Look-Off, at Gallery 215, is directly linked to her own history.

“My ancestors came over here in the 1700s and settled in Riverside, not far from here. I thought: Did they help in building the canal? Were they excited about the canal? They were originally from Ireland and many of the people who worked on the canal were from Ireland.

“About 21 years ago my dad took my family to where our ancestral home once stood and it is just a hollow in the land with trees growing up. Dad took us there and you had the feeling you’re walking across this land where your family roots began. In the woods there were large stones that are grave markers for where the early settlers are buried. They don’t have names.”

The Look-Off is based on a 1988 photograph she took of her son on that day as he stands on a cliff overlooking the Shubenacadie River.

“I just thought it was such a reflection, the appreciation of the past and we have the present and at that early age we had a future. That boy has a son of his own now.”

Fall River artist Sarah Jane Conklin was also inspired by her own experience for a vibrant painting of the water in one of the canal’s locks.

“The first house we rented was across the street from Lock 4. My kids went to Lockview (High) School and years ago we used to pedal-boat up the canal. It was almost as if the project was made for me.”

While Carol Morrison wasn’t able to paint new work due to illness this summer, she regularly paints outdoors around the Shubenacadie Canal. “I’m always going up and down Highway 2.”

Her works at Selma are of Fletcher’s Lake and the Wellington Cut in the fall.

“That’s when I usually get energized,” said Morrison, originally from Leeds, England. “The fall really gets me going because of the colour; in England you never get it.

“The leaves are just turning. If anyone wants the swamp maples, they’re out now.”

All three artists are passionate about painting.

“I’ve done art since the early ’90s. I was an at-home mother and it was more mental health than anything,” says Conklin. “It is amazing to go down (to the studio) and escape. You really get in a zone, you really get away from things. It’s like turning off your cellphone. You’re disconnected from the world.”

Conklin, who has a solo show about water at the Saint John Arts Centre in January, paints landscapes thickly in oil.

“I use a palette knife, brushes, sometimes my hands and gloves. I usually like movement in my paintings, like the wind or the water moving — some kind of energy.”

Guinan, who paints portraits, landscapes and seascapes, thinks people are born with a love of art.

“From the first time you can hold a crayon you want to create and draw. For me it has a spiritual component. I look at the beauty of Nova Scotia and I think God has created all of this for us to enjoy.

“When I’m drawing someone’s face it’s so amazing how we are made and the purpose behind it. Often life is so busy and you don’t take the time to look and observe it.”

Sweet organized the showing at Gallery 215.

“One of the main intents is to educate everyone about the entire canal,” she says, “to have a lot of variety so people at this end, where it’s all red mud and fields, could see what’s going on at the other end because the waterway is so diverse.

“At the Fairbanks Centre there is more of the man-made part of the canal, while here it’s these crazy tides and drama and red mud,” says Sweet.

“We think we change because the tides are so dramatic. I think there is a certain kind of energy carried in the tides and I love how the land hits the Cobequid Bay and the Shubenacadie River.”

The idea behind the Shubenacadie Art Connection is to get people out to see art and the canal. At a park across from the Lawrence House Museum, people can see the majesty of both the river and the bay.

The Maitland area is also famous for something other than tides, says Sweet. At today’s reception “there’ll be good food and lots of it. That’s one of the things we do here is good food. We like to eat out here in the country!”

Nova Scotia artists Sarah Jane Conklin, Carol Morrison and Janice Guinan, sitting on the steps outside Gallery 215 in Selma, near Maitland, each have several paintings on exhibit in different locations along the Shubenacadie Canal in the first Shubenacadie Art Connection, running today to Oct. 4. 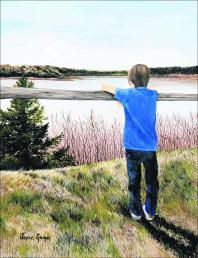 The Look-Off, by Bible Hill artist Janice Guinan, depicts her son in 1988 looking over the Shubenacadie River from land settled by her ancestors in the 1700s in Riverside, near Maitland.