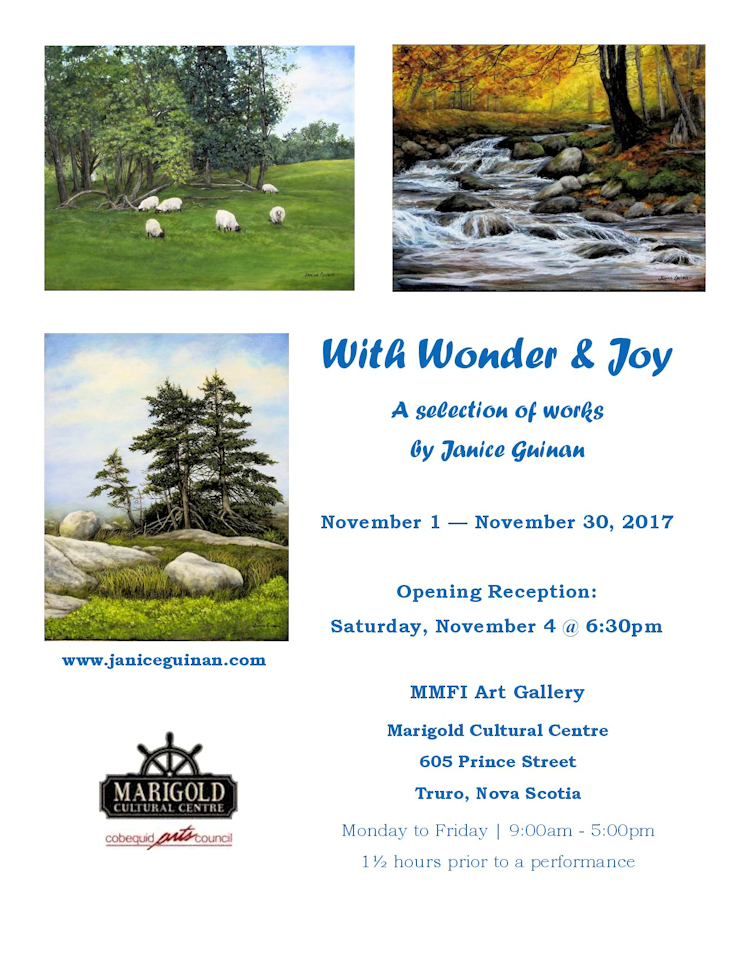 I am thrilled to have work in this  Single Artist Collection Exhibition which opens Friday, October 6th at 2 p.m. at The Hall, 44 King Street, Parrsboro, Nova Scotia.

The web link for this is
https://www.parrsborocreative.com/10-days-in-october/ 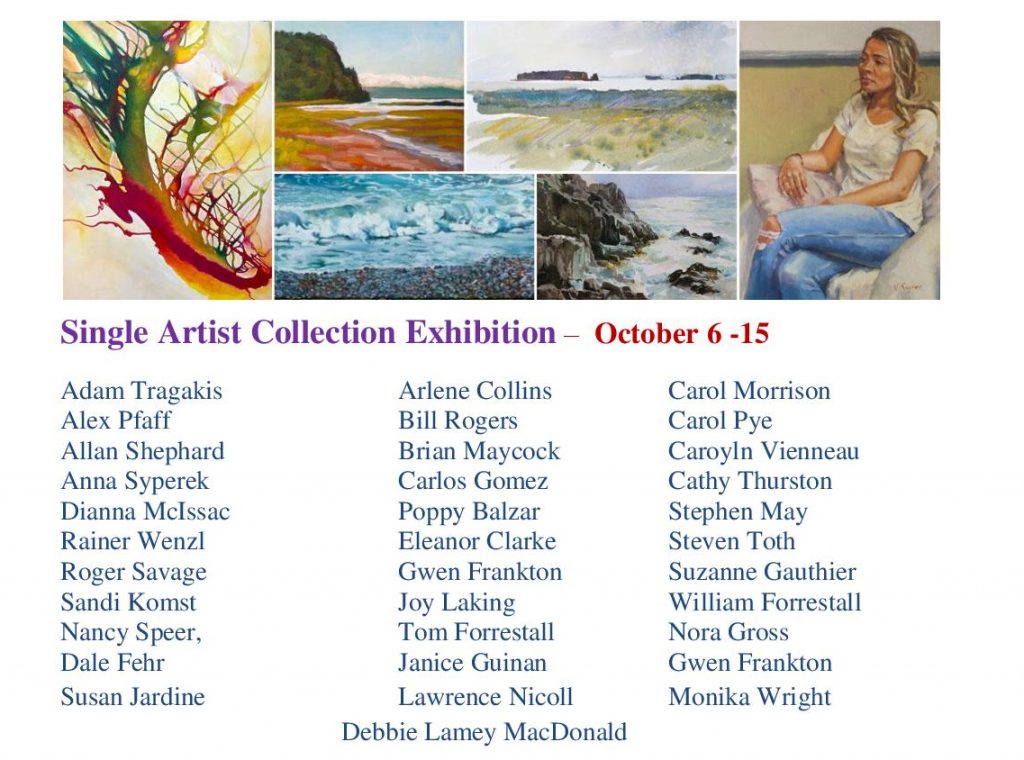 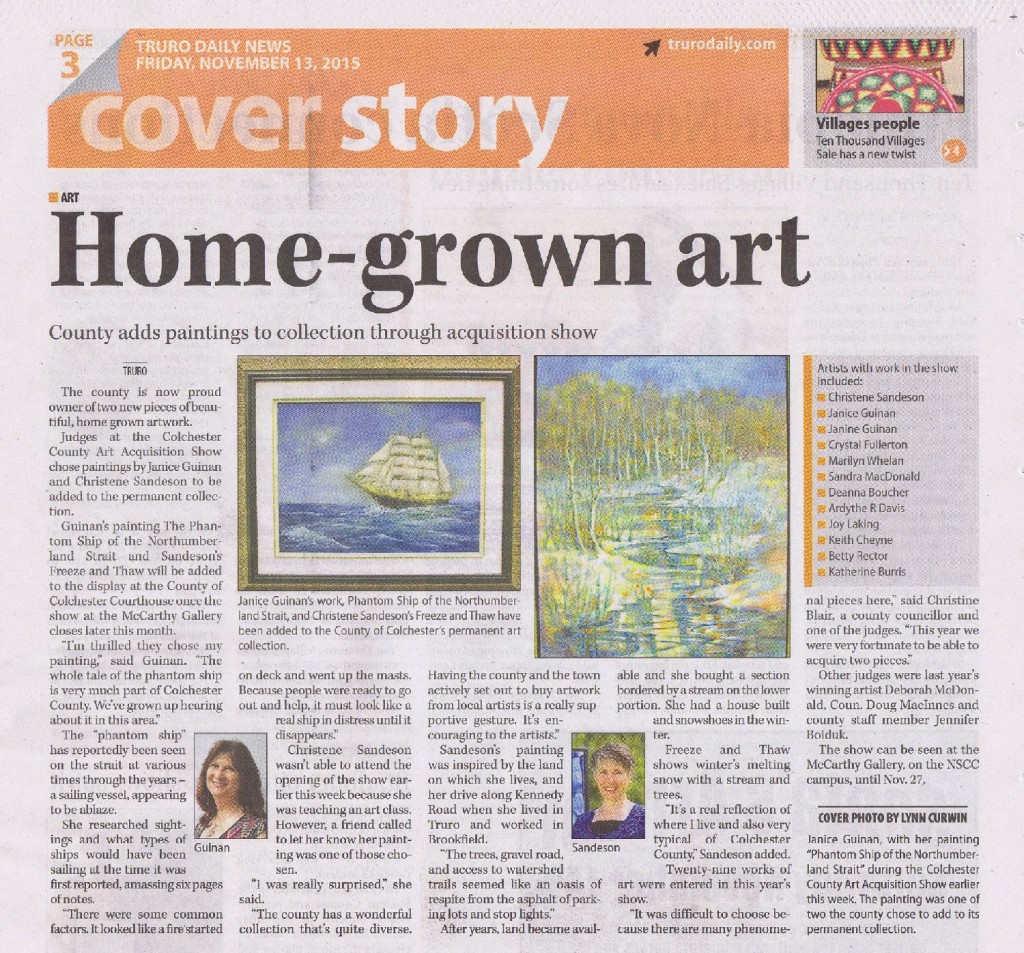 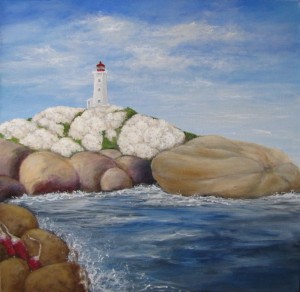 The jury awarded my piece, “Veggies Cove”, with Honourable Mention for the Good. Clean. Fair. Art Exhibit & Sale, which runs from April 22 to May 3, 2014
at the Fraser Cultural Centre, 362 Main St., Tatamagouche, N.S. This show coincides with the National Meeting of Slow Food Canada which will be held in Tatamagouche from May 1-4, 2014. www.slowfoodcanada2014.ca 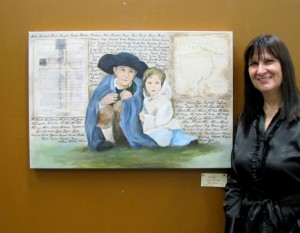 In November 2011, Janice’s painting ‘ A Tribute’ was selected by the judges as this years addition to the County’ permanent Art collection. The painting was to commemorate the 250th anniversary since the arrival of the original Colchester Planters. This was the second time in three years that her paintings have been selected by the County. 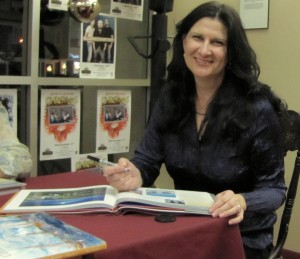 I am one of the 67 artists featured in “Nova Scotia’s Contemporary Artists – Volume II “, by Dee Appleby, that was just released in November of 2010 and this summer will celebrate its’ second printing.
Nova Scotia’s Contemporary Artists – Volume II is now available in Truro at Cole’s Book Store and Nova Scotian Emporium on Prince St.; elsewhere across the province at Chapters; Cole’s Bookstores; in Antigonish at Lyghtesome Gallery; in Mahone Bay at The Moorings Gallery; and at the Art Gallery of Nova Scotia gift shop.

Books can be purchased online by going to the official website, www.novascotiaartists.ca where some of the artists are featured. Part of the proceeds from the sale of books will go towards the José Antonio Valverde-Alcalde New Acquisitions Fund, administered by the Art Gallery of Nova Scotia to purchase the works of emerging Canadian artists. 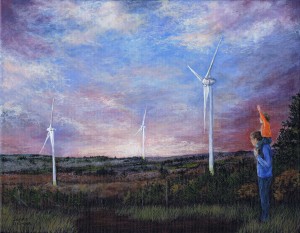 Janice is a self-taught portrait and landscape artist living in Bible Hill, Nova Scotia. The inspiration for the majority of her landscape and seascape paintings is found in the rich beauty of Nova Scotia. 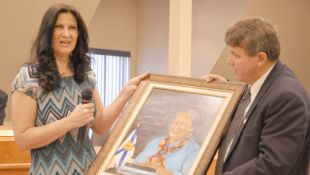 Janice Guinan explains details of her portrait of Willena Jones to Truro Mayor Bill Mills during town council’s June meeting on Monday. The town purchased the artwork to be displayed as part of its permanent art collection. Jason Malloy – Truro Daily News

TRURO – A portrait of a well-respected educator and community leader will soon adorn the walls of Truro’s civic building.

The town purchased the painting of Willena Beatrice Jones to add to its permanent art collection.

“It was an honour and a privilege to attempt to paint this absolutely wonderful lady,” said Bible Hill artist Janice Guinan.

She was “such a wonderful role model for us all and such a treasure for us to celebrate that I really desired to do a portrait of her.”

Jones, who passed away on Feb. 22, 2010, was the first African Nova Scotia woman to teach in Truro schools after graduating from the Nova Scotia Teachers College at age 60.

The portrait shows Jones in a classroom setting wearing one of her favourite scarves, with a couple books, including the Bible and one written by her granddaughter, and a Nova Scotia flag on her desk. The words faith, family, community and education are written on the blackboard of the portrait.

“At a time when many people are thinking about slowing down, she had a new beginning,” said Guinan, who marvelled at how Jones fulfilled a dream by standing on a glacier at the age of 90.

The painting is currently on display at the McCarthy Hall Gallery on the Truro campus of the Nova Scotia Community College. It is part of the art acquisition show, where 16 artists have 36 pieces on display. The show, which runs until June 25, is open to the public Monday to Friday from 8 a.m. to 4 p.m.

The town’s art acquisition committee, which consists of town councillors, artists and members of the public, judged the entries and decided to purchase the Jones portrait.

The town has purchased a piece of art that depicts the historic and artistic development of Truro each year since the show began in 2006. The collection can be viewed at the civic building Monday to Friday from 8:30 a.m. to 4:30 p.m.

The town is currently looking for the best location in town hall to permanently display the collection, which includes art depicting Victoria Park, heritage homes and the town’s rich train history. 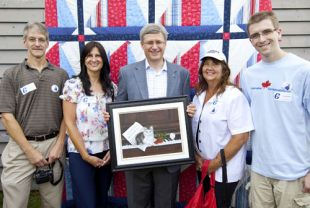 BIBLE HILL – A letter from the prime minister was proof that Janice Guinan’s artwork touched the most powerful man in the country.

Guinan, a Bible Hill resident, received a letter from Stephen Harper last week, thanking her for a painting she gave him in August during a function in Forties, Lunenburg County.

“I was immediately struck by the personal touches you took care to include,” the letter read. “The time and effort you expended is greatly appreciated. Rest assured I will cherish this thoughtful piece.”

Guinan’s chance to give Harper the artwork was unsuspecting. Her parents – Wayne and Cynthia Burris – were invited to the event in Forties, however, Wayne was unable to attend, opening the door for Guinan to take his place, along with husband Dave and son Tomas.

Officials at local MP Scott Armstrong’s office thought it would be a good idea for Guinan to paint a piece for Harper.

“I could have given him a landscape of Nova Scotia that I had already painted, but I wanted to create something that would be unique and special to him and his family,” Guinan said. “I prayed for God to help me know what to paint, then checked the prime minister’s website and discovered that he and his family love cats and foster for the humane society.”

Guinan knew Harper played the piano and was a fan of The Beatles when an idea formed.

Her completed work showed a kitten and the sheet music for ‘With a Little Help From My Friends’ lying on the keys of a piano. She added a red maple leaf to symbolize love of country and patriotism, and a white rose to represent purity in motives.

“Our piano is missing the ivory on the end of one key, which I decided to include as a reminder that no one and nothing is ever perfect,” she explained. “Our piano is over a hundred years old, just like Canada, but still plays beautifully, depending, of course, on the pianist and music selection.”

The day before Harper was to speak, Guinan received a call from Armstrong’s office, informing her the prime minister was still interested in the painting, but it would not be possible to present it during his visit because there was not enough time to go through proper protocol for gifts.

Unbeknownst to Guinan, Armstrong decided to take the painting to the event in the off chance it could be presented to Harper.

Guinan was at a barbecue following Harper’s speech when security officers approached her and asked if she was the woman who did the painting. They then took her and her family to a private area where she was able to present the work to him in person.

“He was very friendly, humble and caring,” she said. “He wanted to know everything about the painting