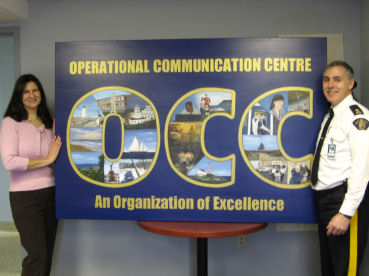 Janice was commissioned by the RCMP to create a painting for the new OCC headquarters in Truro, Nova Scotia, which depicts all aspects of what the OCC does,  it’s partnership with emergency services and scenes of Nova Scotia. This work of art was formally acknowledged by Nova Scotia Premier Rodney MacDonald at the opening of the Royal Canadian Mounted Police Operational Communication Centre on July 5, 2007.

The painting was also featured in the special 75th Anniversary edition of the Royal Canadian Mounted Police quarterly in 2008.

In this picture, Janice Guinan and  RCMP Inspector Mike Leighton.